The impact of relationships at every stage of life–Will Allen, NFL Player, philanthropist, and investor 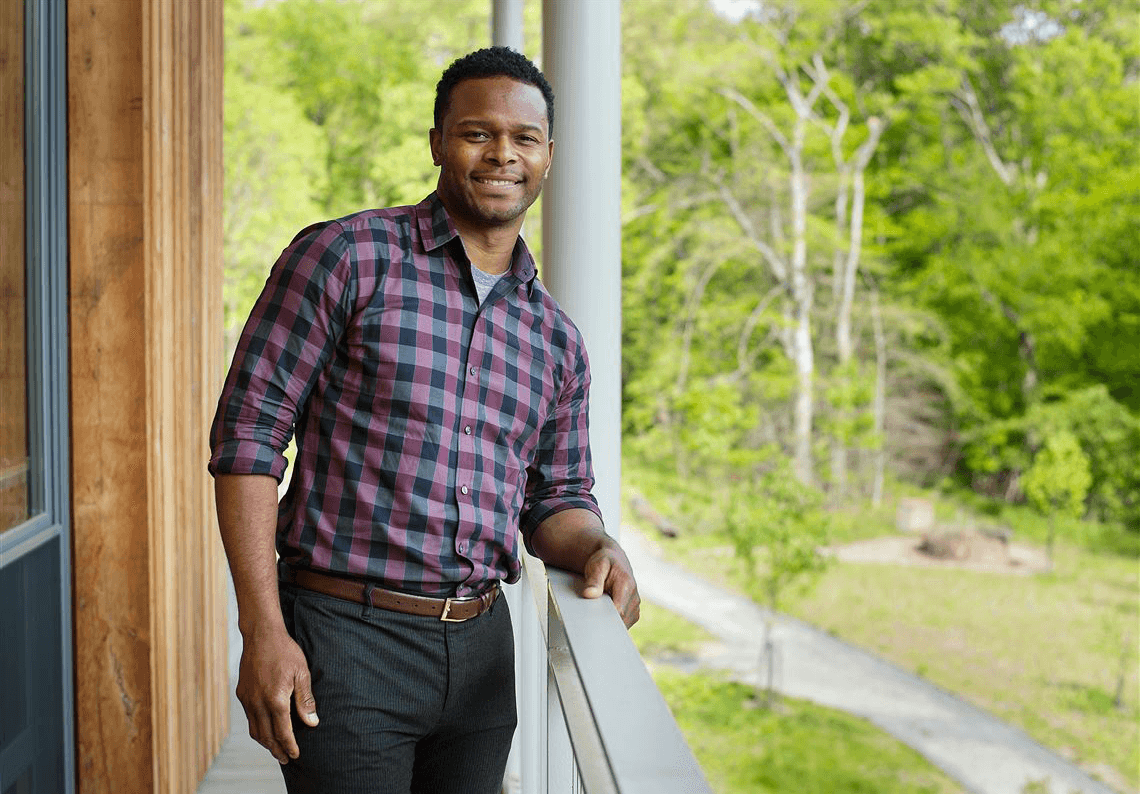 How would you describe yourself as a child?

If I wanted to put on a ton of belts and pretend that I was Rambo or some type of G.I. Joe, I did that.

If I wanted to learn how to swing a bat, I would pick up my dad's big, huge baseball bat and try to swing it.

I was never afraid of trying things and exploring.

“Even today, it’s my formula: facing challenges, learning from other people, listening very well, and then activating what I think is most purposeful for my life.”

Is there a piece of advice from a family member growing up that has remained with you?

Definitely the advice that I received from my grandfather. It’s critical and has always remained with me.

He was always encouraging me, urging me to strive to give my very best.

You know, my grandfather worked one job his whole career and he always told us that we could be or do anything that we wanted in life. He always encouraged us to be better than he was.

We didn't quite understand what that meant, but he was always encouraging and uplifting us to want to achieve our very best.

Did you have any mentors or people in your life who deeply influenced your work and your career?

Absolutely. Having people influence you—whether a mentor, a coach—that's the way of life and it’s vital to be open to that, to be receptive to it.

Everyone from my father to my football coaches to my business mentors have inspired me over the years.

In fact, I'll share a quick story. My college coach, Jim Tressel, was really instrumental in our team’s development as young men. He taught what it meant to serve and give back to the community as an Ohio State football player. It was a huge responsibility and with responsibility comes accountability.

So, we would go see veterans in hospitals. We would serve the elderly. We would visit young kids in cancer wards just to bring them some joy.

Coach Tressel imparted that it was about more than playing football, than being a star athlete. No, he demanded that we have a greater responsibility by impacting the lives of people around us. I discovered my personal passion for service and giving back and have since tried to use my platform to do so.

“Always seek to understand and not to be understood.”

Do you remember a time when your career felt like it took a turn and started to gain momentum? When did that happen and who helped make it possible?

Every time your career takes a turn, it’s abrupt and jarring. Sometimes it's negative and sometimes it's positive. To me, it's all about your perspective and how you look at it. Often what initially seems negative can turn into a real positive.

I'll give you a prime example. When I retired from playing professional sports, I’ll never really be prepared for that. I've dedicated my whole life to sports in some form since I was four years old. And at thirty-three to have that taken away from you is incredibly difficult.

I think that crossroads, that point in my life was a sharp turn because I didn't know what was next. It left me feeling both positively and negatively. I was lucky to lean heavily on people who were close to me: my family members, my spiritual mentors, and my business mentors in order to figure out my next steps. Their support helped me turn what could have been a negative situation into a really positive one. They took my mind from focusing on the past and to figuring out:

This exercise led me to investing, to serving on more boards, and to finding unique ways to give and serve and provide for my community.

How has a failure or apparent failure set you up for later success? Do you have a favorite failure?

A favorite failure? Damn, yes, you bet. I’ll tell you a great story.

When I was a sophomore in college, my college position coach said that I wasn't good enough. He actually told me, “You suck. You can't play at Ohio State, you'll never get on the field, and I don't know how you ever received a scholarship.”

At nineteen, that was probably one of the most devastating things that I had ever heard. Nobody had ever told me that I wasn't good enough. I was always an all star, a hard worker, someone committed to what I was doing. So to hear this really broke me down, almost completely.

I had to look at myself and reflect and say, “Who am I? What effort do I want to give to this sport and to myself?”

It was hard and challenging; in fact, I wanted to quit. I didn't want to be at Ohio State. But, it was a pivotal moment that I always reflect on, that I use as inspiration given how I tapped into and championed myself. I built myself up after being broken down.

This would have been impossible without the people in my life. I spoke with both my spiritual mentor and my father and they really helped me work through this trial. Even though after that experience I wanted to transfer to a different school, I ended up staying at Ohio State and it all worked out for the best. I became an All-American, won a national championship, and was drafted after only starting one year in college.

And two years prior to my graduation, to all that success, everybody wrote me off, including my coach.

So it's just a blessing. I really do believe that it's a blessing from God.

It's one of those tragic and challenging moments where you have to ask yourself, “Who are you going to be in those moments? How are you going to bounce back? How do you tap into your support system to really push yourself past those limits?”

Who are some of the most thoughtful people that you have encountered in your career? What do you think really sets them apart?

Definitely the individuals who make up the Steelers organization. Mike Tomlin, Thomas Tull, the Rooney family, Dave Malone—there are just so many to name.

I would say that the above collection of people has really impacted me over the past twenty years. For example, I played with the Steelers for six years and have known Mike Tomlin since I was twenty years old.

What I've seen all of these people do is to include others in their life. They help individuals realize that they have some type of talent or skill, something to bring to the table. They respect that and they recognize the value in the person that you are. Because of that, they genuinely want to help you and you genuinely want to help them. I think that's the unique, cool factor of relationships, being authentic, and being honest.

All those folks have really had an impact on my life.

“Coach Tressel imparted that it was about more than playing football, than being a star athlete. No, he demanded that we have a greater responsibility by impacting the lives of people around us.”

What advice would you give a student coming out of college to help them succeed in the modern workplace?

A few things come to mind.

To succeed, you have to be humble, I think that's the biggest thing in life and number one for me. You also have to understand your skills and foster your continued skill development.

Additionally, I would say always seek to understand and not to be understood. I think sometimes we focus on the problem instead of finding solutions; the way you find solutions is by listening and being a good communicator. The only way you can do that is seeking to understand others. Once you do that, you can gather information and then use that information to develop your skills and apply them to pertinent opportunities.

You also have to think long term. Though you might be tempted to get the quick wins—and it is good to get wins in your column—you have to understand that the game is long and you’ll be playing it for a while.

I’m a firm believer in both that philosophy and mentality because I have seen it work for me and for many other people.

That's the advice that I would give. Like most things in life, it’s simple but not easy.

Is there anyone on an interpersonal level that you really admire, friend, family member, business associate, or otherwise, have you tried to emulate or adopt anything that they particularly do well in their own life?

I've created this mosaic of different nuances or idiosyncrasies that I have noticed in people that resonate with me. After all, you can always learn from people's behaviors, how they maneuver, and how they act.

Ever since I was a little kid, if I saw something that was intriguing or encountered something that really challenged me, I always embraced it head on. Even today, it’s my formula: facing challenges, learning from other people, listening very well, and then activating what I think is most purposeful for my life.

The most noticeable person that I've really learned that from is my dad. As a coach, he would always talk about humility. He literally and figuratively wrapped his arm around people to help them down the right path.

His intentions and motives were always good. Though he wasn't the wealthiest or most successful person, his mentality on how to embrace young people and help his community has resonated with me throughout my life.

What is a question you wish more people asked you that you haven't had a chance to speak on?

One thing in sports is that the locker room is almost sacred.

That said, sometimes I wish that when I was playing—even outside of sports—that we talked a little bit more about religion and created a safe place to discuss politics.

I wish that we could have an open and safe dialogue about politics. It's okay to have different opinions and viewpoints. But we don't need to be violent or throw around negative connotations about certain beliefs. If we can create a safe place where people can share, I think we will be better off.

Can you recall a moment when your personal values were deeply challenged, but you held your ground despite everything pointing in the other direction?

I can't answer that question because I've always just been myself. My values are my values and what I believe is what I believe. If someone challenges me, I'm always challenging them or pushing back in some way.

Typically, I'm not heavily influenced by other people or what my peers are doing or urging me to do. I've just been blessed in that way to really be my own person and to be my very best self in any room that I walk into. I know that's not the case for a lot of people. They have to morph or shape into what the general population believes in—whether it's their football team or corporate environment. I’ve just been blessed and thankful to march to the beat of my own drum and not have to compromise.

There's things that I want to get better at, yes. For me personally, that includes my values, but when it comes to external pressure and me changing, I haven't had to do that.

Use Case: When Your Business is People

People are our power—Lindsay Kaplan, the cofounder of Chief, a private network of women executive leaders.

Designing a world we can all truly believe in—Mackey Saturday, the principal designer behind Instagram, Oculus, and Clay.